Lawyer Michael Avenatti is facing federal charges in New York and LA for trying to extort millions of dollars from Nike. At what point does threatening a lawsuit cross over into extortion? I discuss on MSNBC.

Chris: We want to talk more about this former US attorney, Paul Charlton is here along with former Prosecutor and Criminal Defense Attorney, Robert Bianchi. Bob, so I think the question for a lot of people is when does threatening a lawsuit crossover into extortion?

Robert Bianchi: Great question. And that’s what Avenatti is going to say, well, I was just trying to zealously advocate for a client, but here’s the thing. He put himself in a box when he said, my client’s damages are 1.6 million dollars and I want to be paid for that. But when he then went to personally advantage himself by saying, I need 15 to 20 million dollars either to investigate and write a report for you, or just give me 22.5 million dollars and I’ll walk away. He has broken the law according to the US attorney because he’s no longer advocating for a legitimate claim of a client as opposed to enrichment for himself. And these facts are locked and loaded. These are not a good thing for him to do. It’s improper to do as an attorney. And I don’t think that you’re going to find an attorney in the world that’s going to get up on the witness stand for him as an expert to say, this is a legitimate exercise in pursuing a client’s case. Last point, what you do is you pursue the client’s case for their damages and you take your fee from the client. You don’t extort it from the company.

Chris: So, Paul, the, the line that Robert mentioned as a non-lawyer is one though that struck me because he, he asked apparently reportedly for that 22 and a half million dollars, he said, and then full confidentiality, we ride off into the sunset. Against that backdrop, isn’t at all common to see lawyers mistakenly cross this line. Is it unclear where the line is?

Paul Charlton: The U.S. Attorney’s position and if these charges are proven true, Chris, is that that line was a red line and a very clear line. Remember the context here in which Michael Avenatti did these acts and took these actions. There’s one in which the southern district of New York has an ongoing criminal prosecution there which relates to the subject area that Michael Avenatti was talking about, another clothing manufacturer, other sports individuals, other NCAA individuals tried and convicted of crimes. You cannot threaten a criminal prosecution to gain a civil benefit. That is the very definition of extortion. And Chris, you don’t have to look too far in our recent history to learn about the sentencing guidelines. And what if, again, these charges are proven to be true, a possible conviction in the Central District of California and a possible conviction in the Southern District of New York means. That means, as happened with Paul Manafort, if Mr. Avenatti Is found guilty, he may be facing a sentence in California and then a consecutive, an additional sentence in the Southern District of New York.

Chris: So, I think I know the answer to this, but I just want to make sure I’m clear on it. Robert. So, Avenatti claimed that he had Nike employees who knew or knew of Nike employees who funneled money into college basketball recruits. We’ve seen this case before elsewhere. Yesterday, the SDMY Prosecutor said, if we’re, we’re now investigating that, right? They’re looking at that. If it turns out that that’s true, does that have any impact at all on what happens to Avenatti? If he can go to court and say, I was actually right about this.

Robert Bianchi: Well, this is what is going to be his defense, I’m a zealous advocate advocating on behalf of my client and the blow is clear. Just the filing of lawsuits, even bogus lawsuits under the Hobbs act, which deals with extortion, is not extortion. However, it has to be exclusively done for purposes of advantaging the client. When you were saying line my pockets with money, that to me is where he went over the line, and clearly, they indicate there if it’s not done exclusively for the benefit of the client, then it can be considered extorted. He’s basically saying, I’m going to knock your market cap down by billions of dollars. I’m going to do it right before the end of the NCAA, the NCAA tournament, and that’s maybe okay, but when he says, I will basically whitewash the whole thing if you pay me money. That’s where the extortion, that’s where you’re no longer become a lawyer and you become a shakedown artist.

Chris: I’ve only got 30 seconds left and this really isn’t an illegal question, Paul, but I’ll ask it of you anyway. And we all know that judges are the range of, you know, personalities, the way they sentenced the whole thing. But generally, what a judge, look at a lawyer differently and say, you knew better. You’re a lawyer, you passed the bar. Are you kidding me?

Paul Charlton: And here’s where a judge would most certainly do that. Again, Chris, if these charges are proven to be true, if you embezzle your client’s money, that is such an extraordinary abuse of your trust relationship between the lawyer and the client, remember these judges are lawyers themselves, I think you will very much risk seeing the anger of a judge as he sentences you for that offense.

Chris: Paul Charlton, Bob Bianchi, thank you so much. 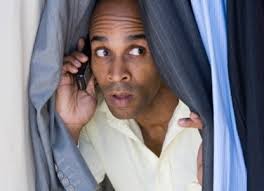 Is it Illegal to Record your Spouse’s Communications with a Third-Party?