The sensational trial of Amber Guyger, a former Dallas Police officer, of victim, Jean Botham was fascinating on many levels.

I covered this entire trial as a host on the Law & Crime Trial Network where our professional expert hosts and guests hotly debated this trial.

Factually, Amber Guyger after a 15-hour shift returns to her apartment complex.  As many others in the apartment did due to its design, she accidentally parked on the wrong parking deck and got off on the wrong floor. She went to an apartment, thinking it was hers, and entered.  Therein, was Jean Botham, who was the actual tenant of that apartment.  Thinking Botham was an intruder in her apartment, she shot two times and killed Mr. Botham.

By all accounts, Mr. Botham was a wonderful man. Mr. Botham’s background was compelling.  He was a God-fearing man and singer of note at his church.  His last moments were watching TV and eating ice cream. One can only imagine his fear in the final moments of his life.

A mistake of monumental dimension.  Mr. Botham was dead, and Amber Guyger was now a defendant in a sensational trial that captured the Nation’s attention.

But, the fact is (despite those with blinders on, or an agenda to fulfill) that Amber Guyger made a mistake. And, she was convicted of murder by the jury, the highest charge in the indictment, although the jury had the ability to convict her of lesser offenses or acquit her altogether. In Texas, the jury determines the sentence and the law there provides for a sentencing range of 5-99 years in state prison.  It was up to the jury as to how much time she would serve.

The jury ultimately delivered a 10-year sentence.  Now, many objected to this “light sentence.”  Even some of my most trusted and respected colleagues felt the sentence for murder was too little, too indulging. I disagree!

I think this jury did what they were instructed to do.  They demonstrated their seriousness by convicting her of murder.  But the jury, those that heard all of the evidence, knew in the end that Amber Guyger should not be sentenced like those that murder out of “ill will” hatred, anger, or other more sinister motivations to kill.  It was clear to them, as it was me, that Mrs. Guyger’s actions were a tragic mistake! And, their sentence reflected that very fact.

The jury delivered a measured and reasonable sentence that both delivered a message (I guess, as mistakes are unanticipated events) and showed balance and wisdom.

But, something very beautiful, more powerful, inspiring and attention-getting occurred to the surprise of many court watchers-even me who after 30 years as an assistant prosecutor, Head NJ county Prosecutor, and now criminal defense attorney.

Just to preface. When I became the Morris County Prosecutor, the first thing I told my staff of awesome assistant prosecutors was that it was our job to judge conduct, not people. Once we objectify defendants, do not take into account context, mitigating circumstances, mercy and balance, we may overreach. It was our jobs (at least in my view) to achieve “justice.”  But, justice means different things to different people. What I did know, however, was that if we demonize the defendants it made it easier for us to go too far.

During the Amber Guyger sentence, his brother, Brandt Botham, took the stand to offer “victim impact” testimony. I have never seen anything like it, nor has any lawyer I know witnessed either.

From the witness stand, and without vitriol, accusations, hatred, or disgust, a visibly anguished Brandt spoke to the convicted ex-police officer, telling her he forgave her.  He said that he only wished that she found Jesus as her solace- and that is what Jean Botham would have wanted.  Brandt, a soft-spoken, gentle man, then asked the judge if he could give his brother’s killer a hug.  After a pause at the unusual request (not to mention security risk) that judge granted him permission to do so.

The hug is not articulable, but something you have to see.  Two wounded “adversaries” embarrassed one another for a prolonged period of time.  It was moving. But it was not over!

Judge Tammy Kemp also came down from the bench and hugged the family of the victim, and the defendant.  She also gave the defendant her very own Bible and referenced her to a paragraph to read, John 3:16.

Many have opined that Brandt was appropriate in his actions, but that judge Kemp was not.  I get it, no doubt it was unorthodox. But, was it wrong? I say no way!  What judge Kemp did was much like what I told my assistant prosecutors.  We judge conduct, not people.  I never reveled in putting any person in jail as a prosecutor-it was a part of my job to bring justice to the victims of crime. But, I never personalized it with the defendants I convicted and put away.

Here, judge Kemp’s job was done.  She handled the case with skill and aptitude. But nevertheless, she and Brandt did something I think we all could take note of.

They didn’t merely espouse their faith, they put it into meaningful and compelling action.  They showed compassion, mercy, and a willingness to say you can be saved, you are still valuable, you are still worthy – despite your transgression(s).

Do I think judge Kemp does this in every case?  I doubt it.  I think that she realized that in the end Amber Guyger was not a plotting, heinous, calculated killer. She was merely a young woman who made a tragic mistake.

I applaud Brandt and judge Kemp for showing us what faith in action really looks like! 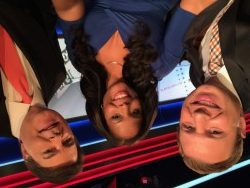